Beast of the East 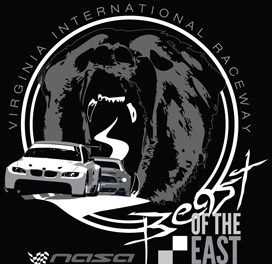 Win a Race Weekend!!!
Beast of the East Championship 2019
More Racing in the Mid Atlantic !!!!

Beast of the East (BOTE) is a series in which each driver gobbles up as many points as possible through the season.

Traditionally the Sunday race day schedule in the Mid Atlantic has consisted of a 15 minute qualifying session and a 40 minute race.
For 2019 we are going to turn the Sunday qualifying session into a BOTE race and add 5 minutes to make it a 20 minute race.
The second race on Sunday will be the traditional format starting by wave with like class cars gridded together by time.

This race will do three things

Fastest time in the BOTE race will set a driver’s grid position for Sunday’s second traditional points race.
Driver will accrue BOTE points based upon how they finish in their BOTE bracket.
Driver will ALSO accrue 1/2 the normal amount of season points for his/her traditional NASA race class. (i.e. spec e30)

Saturday’s qualifying session times will set the grid for the Sunday morning BOTE race as well as the traditional grid for the Saturday race.
NASA MA will create BOTE class brackets based upon Saturday qualifying times for that given weekend. It is possible that one will be in one bracket at VIR and another at Summit Point and then another when back at VIR.
BOTE brackets will be by color. Once the brackets have been defined after Saturday qualifying the grid will be posted and two stickers per driver will be available at Registration. These stickers are colored, indicating BOTE bracket. They are to be placed on the center top of the windshield and center top of the back glass.
The BOTE race will be a rolling start of the entire field under one green flag.
It is likely that two cars in the same traditional NASA class may have cars from other traditional NASA classes gridded between them within their BOTE bracket. For example the two fastest Spec E30s may have 1 Spec3, 2 Honda Challenge cars and 1 Spec Miata between them. This gridding format is unique to the BOTE race. During the BOTE race a driver will get 1/2 points for their traditional NASA class and full points for their BOTE bracket essentially getting points for two different races within the same race.
Whoever has the most points at the end of the season is the Beast of the East for their race group. A Thunder BOTE and Lightning BOTE will be crowned at season’s end as well as Almost Beast (2nd) and Beast-ish (3rd)
Example: If at VIR in March, Driver A wins the Orange bracket and Driver B wins the Red bracket they both collect 100 points toward the BOTE Championship.
As this is purely a chase for points it is possible that a driver regularly placed in the slowest bracket can still be THE Beast of the East as long as they have done well in their assigned brackets at each event and gathered the most points overall.
Drivers will be able to drop their lowest BOTE race.
Points will be awarded upon the following scale 1st-15pts, 2nd 14pts, 3rd 13pts etc.
There will not be BOTE races at HyperFest.
There will be a BOTE race at all other NASA MA events on the points schedule including PITT Race.
There will be a winner of BOTE-Thunder and BOTE-Lightning. Winners will receive a free race entry for the 2020 season.